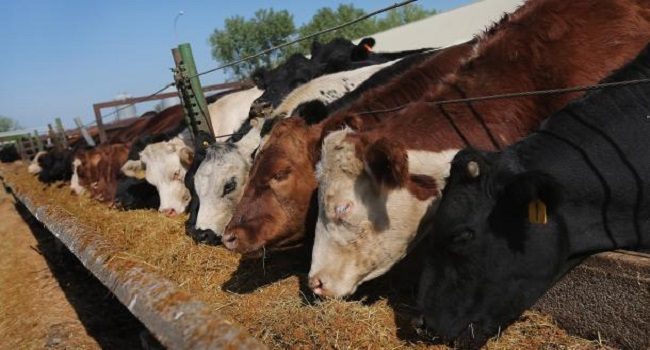 Energy is the first demand in all animal nutrition. The energy needs will be met first, and at the expense of all other nutrients. If the energy need is not satisfied and protein is available, it will be broken down to satisfy the energy needs first before any protein is utilized to meet amino acid needs. The total energy requirements of animals surpasses all other nutrient requirements. It is therefore necessary that maximum energy required be received from the energy source, so as to preserve the protein fed to meet the animal’s protein requirements. There are only two main sources of energy, namely the carbohydrates and the extract or fat portion of the diet. If energy is deficient, then protein is used as a source of energy, which is very expensive and highly inefficient. In today’s feed rations, carbohydrates and fat both have problems meeting the needs of the animal, when we try to meet the energy requirements with grain alone. Carbohydrates from cellulose sources are too bulky for the animal to consume sufficient quantities to meet its energy requirements. Fat sources have palatability problems, so meeting energy requirements with fat is limited. If protein is used, the net energy gain is too expensive and the stress on the animal from the excess protein, which is converted into ammonia, is a major problem. It is therefore necessary to use an energy source that does not create these problems and comes in a package the animal is capable of consuming in a daily allotment of ration. That source is Ethyl Alcohol and it is present in Liquid Hydrogen-enriched Energy Supplements.

The entire world is made up of only two things, energy and matter. We know that life is energy; every move we make takes energy. All energy comes from the sun, and hydrogen is what makes up over 82% of the sun’s rays. The hydrogen atom has six different levels of ultra-violet rays (UV-1). Ethyl Alcohol contains the highest levels of UV-1 known to man. The bugs in the rumen are not interested in alcohol per say, but in the hydrogen atom.

Without my hydrogen supplement, your daily animals have to meet their daily hydrogen requirements from their daily ration. This requires them to consume many more pounds of feed and lowers conversion (One pound of Liquid Hydrogen Supplement plus three pounds of roughage has the grain energy of four pounds of corn). Ethyl Alcohol works 30 times faster than carbohydrate source of energy and does not create the acidosis problems associated with high grain rations.

Alcohol increases the number of roughage loving bacteria in the rumen, which allows the animal to process higher amounts of roughage and lower amounts of grain. This reduces the incidence of laminitis in the dairy cow. Laminitis or founder as it is also known is an inflammation created by high grain feeding that produces lactic acid, which travels in the blood and separates the horny laminae of the foot. The most common cause is excessive amounts of grain and rations low in long stem fiber, trying to meet the energy demands of present day genetics. Increased intake of roughage by the dairy cow will increase butterfat, which means higher prices for your product.

Without Hydrogen supplementation the animal has to receive the Hydrogen needed from feedstuffs which in turn required many more pounds of total feed and lowers conversion (One pound of Alcohol Energy supplement plus three pounds of roughage has the grain energy of four pounds of shell corn). Ethyl Alcohol works 30 times faster than carbohydrates sources of energy and does not produce acidosis as high grain rations. The reason Ethyl Alcohol is used in our liquid supplements is because of its superior quality of Hydrogen and it doesn’t contain impurities such as some other energy sources collected as by-products of the petroleum industry.